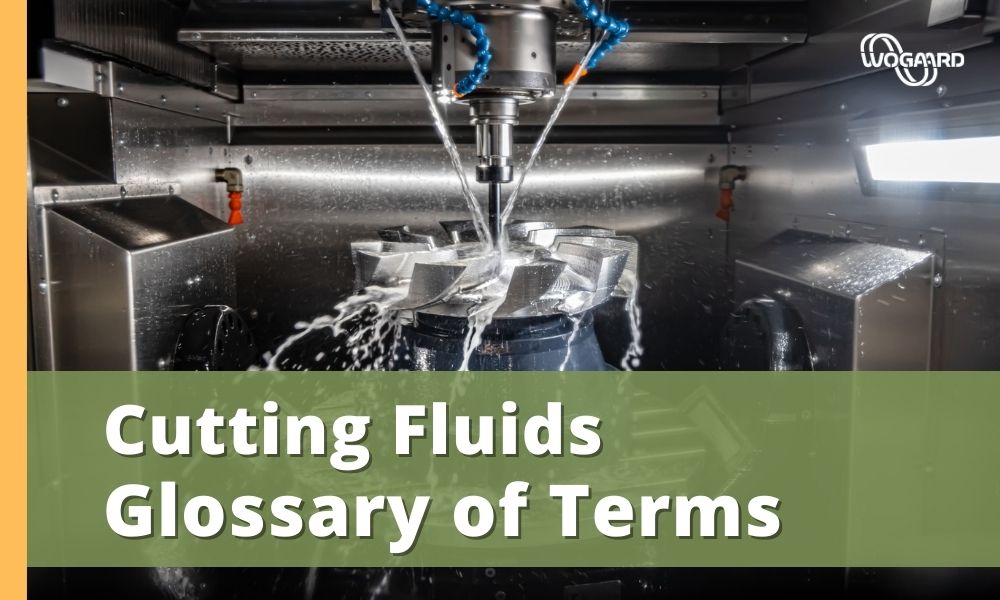 ​The following series of publications are intended to provide further information around the world of metal cutting fluids to help everyone involved in their use to take the necessary measures when dealing with these products while making the most out of them in terms of reducing, reusing and recycling. Below, we present you a glossary of terms that we are certain it's going to be very useful.

Alkaline: Pertaining to having a pH greater than 7.0; sometimes called caustic.

Ammonia: A gas (NH3) comprised of nitrogen (N) and hydrogen (H) that has solubility in water ; can be formed when specific bacteria biodegrade certain amines into ammonia and water; the ammonia can be released into the air creating worker complaints.

Bacteria: Micro-organisms that live in the air, soil, and water that can infect a metalworking fluid; the infection creates problems as the microorganisms consume various product components; bacteria are typically less than 1 micron in size.

Biocide: A Federally controlled substance that kills both bacteria & fungi.

Biofilm: A gelatinous mass of bacteria and/or fungi that deposits a film on a solid surface.

Boundary: Lubricant A polar molecule that aligns itself with the metal surface to create a “cushion” of lubrication; esters, fatty acids and fats are commons boundary lubricants.

COC: Abbreviation for Cleveland Open Cup; laboratory device used to determine the flash point of a fluid above 212°F (100°C).

Chloride: A negative ion (anion) of chlorine typically found in most water supplies; prone to creating corrosion in higher concentrations in aqueous applications.

Chlorine: A compound of chlorine atoms; typically used to provide extreme pressure lubrication in the form of a chlorinated compound like chlorinated paraffin.
Dipslide: Any type of plastic paddle that holds a surface of agar that is dipped into a used metalworking fluid to determine the presence of microorganisms; usually one side of the paddle detects bacteria while the other detects fungi.

Emulsion: Two fluids that are immiscible (i.e. not mixable) that are intimately dispersed in one another with an “oil” particle size that is greater than 0.10 microns.

Endpoint: The completion of a titration; usually marked by reaching a specific pH (potentiometric) or color change with an indicator (colorimetric); see titration & indicator.

Ester: An organic compound that is created by a chemical reaction between an alcohol and an acid; an ester is polar and provides boundary lubrication; esters can be man-made or natural.

Falex “Block on Ring” Tester: Laboratory test method used to assess and compare lubrication qualities of metalworking fluids. A ring of metal rotates while a block of metal is applied to the outer diameter of the rotating ring; a scar is produced on the block and is measured as part of the analysis.
Fungicide: A Federally controlled substance that predominantly kills fungi HLB Abbreviation for hydrophile-lipophile balance; a numeric value (0-20) assigned to emulsifiers and surfactants (see hydrophilic & lipophilic for more details) to provide information regarding the emulsification properties of the chemical.

Hardness: Related to water quality and is made up of the calcium (Ca) and magnesium (Mg) content expressed as PPM of calcium carbonate (CaCO3).

Hydrodynamic: The simplest form of lubrication; a simple liquid film that provides a temporary cushion between two moving surfaces.

Hydrophilic: Having a water-loving characteristic or quality; hydrophilic compounds are more water soluble.

Indicator: Specific fluid used in very small quantities in a colorimetric titration that creates a colour change when the endpoint is reached.

Invert: As in invert emulsion; this would be a water in oil emulsion (W/O) that is created when water is added to product concentrate instead of the other way around.

Lipophilic: Having an oil-loving characteristic or quality; lipophilic compounds are more oil soluble.

Lubricant: Any fluid that reduces friction between moving surfaces.
Micelle: Technical name for the grouping of surfactants; often used when describing the emulsification of the oil droplets in an emulsion.

Micron: A measurement of length designated by the Greek letter mu (μ); one micron is equal to one micrometre (μm), 0.001 millimetres or 0.000039 inches.

PAH: Polycyclic aromatic hydrocarbon; this is the multi-ringed hydrocarbons found in base oils during the refining process; some are known to be carcinogens; PAHs are eliminated via solvent extraction or severe hydro-treatment.

PPB: Parts per billion; one PPB is equivalent to one millilitre in 251,000 gallons.

PPM: Parts per million; one PPM is equivalent to one millilitre in 251 gallons.

PPTH: Parts per thousand.
Polymer: A chemical compound containing a repeating unit of a particular base unit (i.e. monomer); many solution synthetics utilize this technology for lubrication; while there are some natural polymers, most of this technology is a synthetic, man-made chemical.

Premix: The action of mixing a water-soluble concentrate with water in order to create a stable mixture under controlled conditions prior to going into the main clean tank.

RO: Abbreviation for reverse osmosis; RO is used to treat water to remove ions and is often used in conjunction with and after water has been passed through deionization (DI).

Rancidity: The biodegradation of coolants by microorganisms growing in the fluid typically acknowledged by strong obnoxious odours.

Refractometer: An optical device used to determine the concentration of aqueous mixtures.

SUS: Abbreviation for Saybolt Universal Seconds; a measure of viscosity.

Semi-synthetic: Metalworking fluid that contains some oil but has a small enough fluid particle size to be considered a micro-emulsion (less than 1.0 microns); a semi-synthetic is typically translucent in appearance when diluted in water.

Soil load: A measurement of finely dissolved dirt and particles in a metalworking fluid; this can be determined via centrifuge or via filtration of a fixed volume of fluid.

Soluble oil: Metalworking fluid that contains oil and emulsifiers and creates an emulsion when added to water; a soluble oil is typically milky in appearance when diluted in water.

Solution: A mixture in which the fluid is immediately and completely soluble in water; a solution has no fluid particle size, contains no oil and is clear in dilution; sometimes called solution synthetic.

Stain: A chemical process similar to corrosion that produces slight imperfections of the metal surface; can typically be chemically removed without extreme damage to the metal substrate.

Straight oil: Metalworking fluid that is used as received; typically contains oil with a variety of additives.

TDS: Abbreviation for total dissolved solids; a measurement of ions (dissolved chemicals) in solution usually expressed as microSiemens or micromhos.

Titration: A simple acid-base reaction conducted to determine an alkalinity or acidity of a fluid; the method is employed to determine concentration of an unknown.
​
Tramp: oil A liquid contaminant that gets into a metalworking fluid and creates problems; sources are hydraulic oils, spindle oils, way lubricants, rail lubricants and gear lubricants; incoming parts can carry in corrosion preventives or cutting oils as tramp oil; these fluids can cover the surface of the metalworking fluid, cutting off the air supply, permitting bacteria to grow.